← more from
Friendship Fever
Get fresh music recommendations delivered to your inbox every Friday.
We've updated our Terms of Use. You can review the changes here. 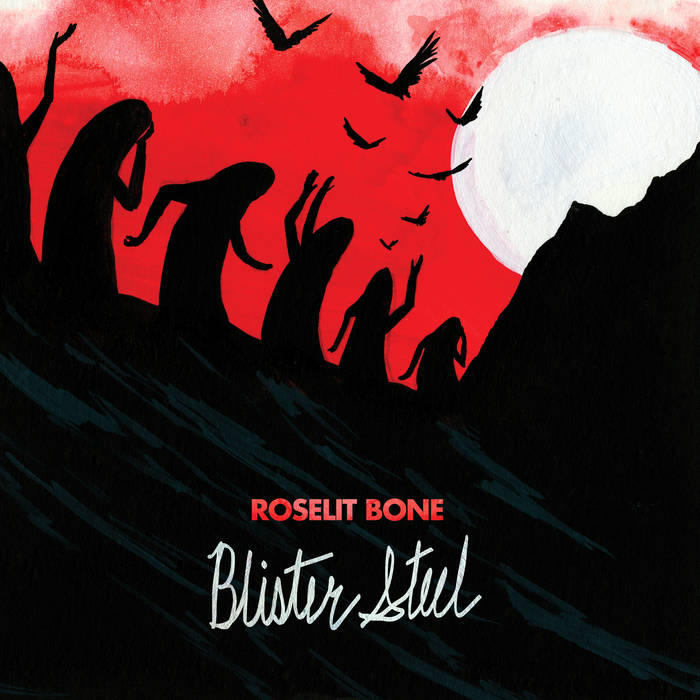 The Father of Modern Economics

A pandrogyne cowboy, mascara smeared, guns blazed out, lies drunk under a starless sky. A young boy sits under a blasted tree with a bone and a wire, numbed by a nameless catastrophe. White-robed dancers leap and crawl around a fire, celebrating a hungry god that was once a brand name.
It’s hard to listen to Roselit Bone’s upcoming release, Blister Steel, without creating movies in your head, without bleak and beautiful images invading your consciousness. It’s a deeply immersive record – one that leaves you changed.

A native of Southern California, Joshua McCaslin formed the band in Portland, Oregon in 2013: first as a duo with drummer Ben Dahmes, then a trio, and eventually a 9-piece ensemble of flute, trumpets, pedal steel, accordion, violin and more. Josh himself is a triple threat: a versatile and accomplished guitarist, a powerful writer of vivid nightmare-poetry, and a singer unique in his ability to croon like Marty Robbins, bellow like Nick Cave, and scream, grunt and wail like a defiant, wounded animal.

If 2014’s self-released debut Blacken & Curl set the tone, Blister Steel refines and expands it. Josh’s lyrics are crueler and darker, the arrangements bigger and more ambitious, the vision and scope blown up into a panoramic, foreboding landscape that looks disturbingly familiar. The grandeur of Mexican ranchera and the innocence of Hollywood’s singing cowboys belie a savage, dystopian take on hot-rod rockabilly, surf music, Tex-Mex, and post-punk. The ten-piece band moves deftly from seething minimalism, to lush countrypolitan walls of sound, to unhinged noise.

On the title track, nimble minor-key fingerpicking weaves through what sounds like a choir of Benedectine monks until horns break like a red sun over the song. Josh’s vocals throughout showcase his range: operatic keening, moaning, whispering, screaming – warning of a vaguely terrifying figure:

“What I saw down there, I do not know/but I know that it was real/the king came drifting through the snow/with eyes as blue as blister steel.”

On “Glint” a Latin bassline whirls us across a deserted dance floor. Rimshots echo against the walls. Shards of Barry Walker Jr’s pedal steel fly like shrapnel as the song hits its ferocious, orgiastic crescendo. “Leech Child” is a lonely waltz with tremulous electric guitar and flautist/vocalist Valerie Osterberg’s harmonies woven through spaces as empty as the Oregon desert, with lyrics that might describe a future cult in a world drained of hope. “Tie-Dye Cowboy” adds a moment of levity – an homage to the cosmic cowboy scene of the 1970s – while “My First Name” sounds like a lost track of primitive rockabilly as Joshua exhorts and shouts like a preacher who moonlights as a bareknuckle boxer. “Where Our Light Casts Doubles,” casts a hazy spell of 1950s balladry, even as Joshua sings of being a “cold motherfucker” taking a walk through the hills to escape his lover and her “snoring, shitting dog.” Beauty and ugliness are inseparable on Blister Steel.

The vision of Roselit Bone is not an easy one to stomach. It’s a world of abuse, violence, environmental and personal degradation. It’s a world that closely resembles our own, and if some of Joshua’s lyrics about nightmarish authority figures precede the current political catastrophe, it makes them all the more remarkable. If Blister Steel is the canary in our coal mine, it sings a dark and beautiful song.

“’Blister Steel’ is a runaway success … an unnerving set of booze-soaked, blood-curdling hellfire hymns that sound like very few other bands anywhere”
—The Portland Mercury

“Like Marty Robbins meets The Cramps, or a Goblin sountrack to a spaghetti western, ranchero fantasy meets greased up country in a magical reality.”
—American Standard Time ... more

Bandcamp Daily  your guide to the world of Bandcamp

Trevor de Brauw of RLYR and Pelican stops by for a chat, plus a tribute to the late Trevor Strnad